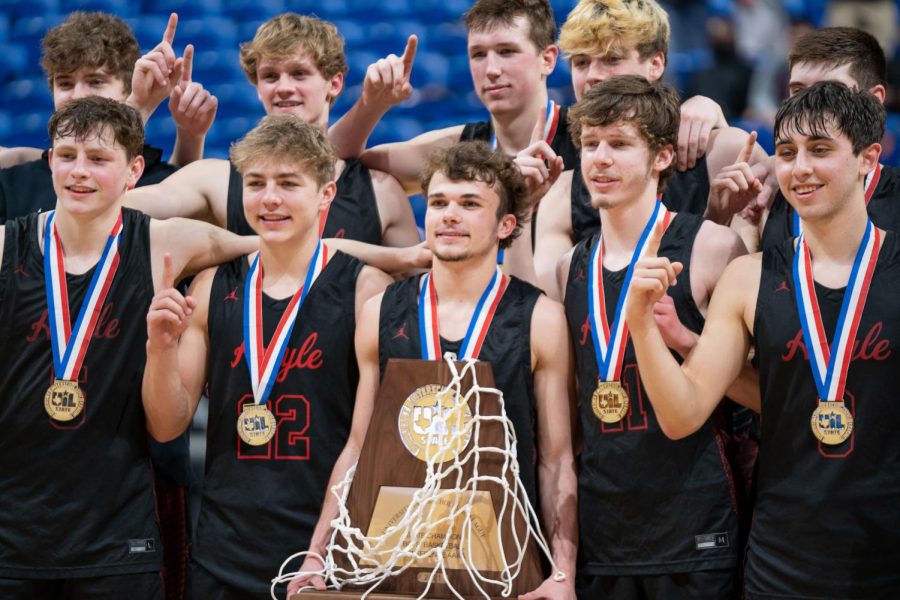 The boys basketball team secures another state title for the Eagles after winning the State Championship on March 13, at the Alamodome in San Antonio, Texas. (Nicholas West / The Talon News)

The boys basketball team took first place in the State Championship game on March 13. The Eagles entered the game with a near-perfect 29-1 record, leaving with a 30-1 record and a state title. Senior point guard Skylar McCurry was named MVP of the game as the Eagles were able to top off their season with a 49-30 victory over the Huffman Hargrave Falcons in Head Coach Russell Perkins first state title at Argyle.

After having to abruptly leave the state tournament last year, Perkins and the team knew they would have to find a way to get back to the Alamodome.

“To go and win it, it’s just so special,” Perkins said. “To see the progress and the journey of the team, that’s what’s just so fun about it.”

The team’s starters stepped up every game along with the team’s bench. Although, the starters were what stole the show. The team’s depth showed every game.

“Our guys, our team, they all stay ready to play every night,” Perkins said. “That takes a lot of strength and courage just to get here every day and play to the best of your ability; we have 16 guys that can get after it every game and practice.”

As MVP of the game, McCurry led the way for the Eagles, hitting big shots.

“He was huge. I mean huge for us. He hit big shots at big times,” Perkins said. “Skylar has done that all year. We just get the ball into his hands for those big-time shots.”

COVID-19 was a huge factor this year, but the team was able to overcome its challenges and stay healthy to secure a state championship.

“Last year, we got stuffed by it and it really broke our hearts,” McCurry said. “But to come back here and win, especially with it being my senior year, it’s just really special.”

“He’s a very special player, he does everything right on the court,” Perkins said. “Slate was as good as anybody guarding him. He makes things hard and forces tough shots for them.”

The team was led by its seniors who were able to guide the young members of the team through the difficult year and the playoffs.

“This team is super special,” senior center Nate Atwood said. “We are all super good friends and close together. We have great chemistry and even though we don’t have the star players that other teams have, we can work together and that’s what makes us special.”

The winning culture in Argyle is clearly evident and the expectations remain high for the future.

“Ever since I was young and growing up here, all I heard about was Argyle winning,” McMellian said. “It’s really awesome to be a part of that. It’s really special.”

For right now, the team and the city of Argyle are going to celebrate their second boys basketball state championship.

“I’m not very good at celebrating,” Perkins said. “I like making these kids better at everything. I have very high expectations and I want these kids to feel the experience of what they are getting to do right now.”