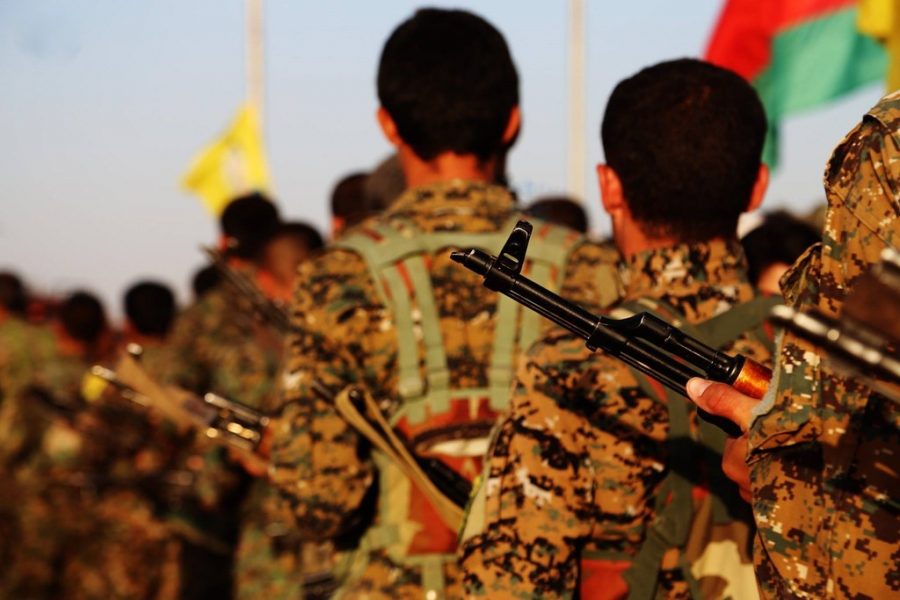 “Kurdish YPG Fighters” by Kurdishstruggle is licensed under CC BY 2.0

A New Day, A New War (At the Moment with Billy Mykel)

It has been over a year since President Trump announced his controversial decision to withdraw U.S. troops stationed to protect Kurdish-held territory in Iraq and Syria. This decision, made after a phone call with the Turkish dictator Erdogan and days before the Turkish armed forces invaded North-Eastern Syria, left one of the United States’ closest allies in the region isolated and vulnerable. Now, a little over one year later, the Kurds are on the verge of an intra-ethnic conflict that could destroy all hopes of a free Kurdish State.

President-Elect Joe Biden should make protection and support for the democratic Kurdish forces a primary objective his early administration.

Before talking about why the United States should support the Kurdish people again, it’s important to know who they are and what is happening. The Kurdish, the largest minority group in many Middle Eastern countries, are a distinct ethnic group that maintains their own social and national identity. Following the partition of the Middle East, when the region was decolonized and independent nations were created, the Kurdish were left without a country of their own, with their land divided between the Turkish, Iraqi, Iranian, and Syrian nations. The large ethnic people, who found themselves divided into minority enclaves, quickly faced persecution and injustice under the majority ethnic groups of their new host countries. In recent years, facing harsh oppression and instability in the region, many Kurdish decided to take up arms to defend themselves. Today, the Kurdish people are represented by several different groups, with the most prominent being the Syrian Democratic Forces (SDF), the Kurdistan Regional Government (KRG), and the Kurdistan Workers Party (PKK). The SDF, the most powerful Kurdish military group, is based in northern Syria and was formed during the Syrian Civil War in response to the Syrian government’s war crimes and authoritarian actions. With the outbreak of war, the SDF declared independence from Syria and formed Rojava, an unrecognized, ethnically Kurdish, and democratic nation in northern Syria. The next largest Kurdish group is the KRG, a democratic organization and political party based in Iraq that represents the Kurdish in the Iraqi government and runs the semi-autonomous region of Northern Iraq. The final Kurdish group, the PKK, stands in stark contrast to the democratic SDF and KRG. Based out of Turkey, the PKK is internationally recognized as a terrorist organization that has been fighting a war of revenge against the Turkish government in south eastern Turkey in response to years of persecution.

As of today, despite both sides representing the Kurdish people, the SDF and KRG are on the verge of full-blown war with the PKK. The incredibly high tensions between the groups is the result of the PKK assassinating a KRG leader in Iraq and bombing a pipeline in Northern Iraq run by the KRG. PKK militant fighters in Northern Iraq have also taken over a series of KRG run villages and fought skirmishes with KRG soldiers. As it stands now, the SDF, a close ally of the KRG, has condemned the attacks and begun preparing for a confrontation with the PKK. Already fighting a harsh conflict in Syria against the Syrian government, ISIS, and other jihadist groups, the SDF and the KRG face the very real possibility of becoming overstretched and unable to continuing fighting. This would prove disastrous for American interests as it could mean the closing of a front against ISIS, allowing the terrorist group to resurge and continue its jihad against the United States. The SDF has also been responsible for imprisoning most of the ISIS fighters captured throughout the war, with tens of thousands of ISIS militants being kept in SDF prisons throughout Rojava. Should the terrorist PKK free these fighters, or the SDF abandon the prisons in order to protect civilians from terror attacks, thousands of anti-American jihadist fighters could potentially be freed to continue the fight against the democratic forces. The war could also serve to destabilize the already weak Iraq further, as the KRG is part of Iraq and protected by the Iraqi federal government. Should war break out between the Kurds, it would mean Iraq would be drawn back into war before reconstruction could even be imagined and could possibly create an opening for ISIS, Al-Qaeda, and Iranian backed militant groups to come out of the shadows and resume their terrorism and occupation in the country. A war between the PKK and the democratic Kurdish groups would also inevitably involve Turkey, who would have to be involved in any operation to destroy the PKK whose base of operation is within the Turkish territory. Not only would this mean pulling Turkey, a key US ally and NATO member, into a war, but it could also involve further Turkish expansion into Kurdish territory, potentially undermining Kurdish sovereignty and ending hopes of an independent Kurdistan. The prospect of war in absence of American Troops could also give Russia space to further expand their influence in the Middle East, which is compounded by the close relationship between Turkey and Russia.

In the end, the outbreak of a Kurdish vs Kurdish war would be disastrous. Potentially embroiling an already war-weary region into another decades-long conflict, preventing the war on terror from truly ending, and ending all hope left to a long-oppressed people, the United States should do everything in its power to prevent the conflict from occurring and protect our Kurdish allies in the region.