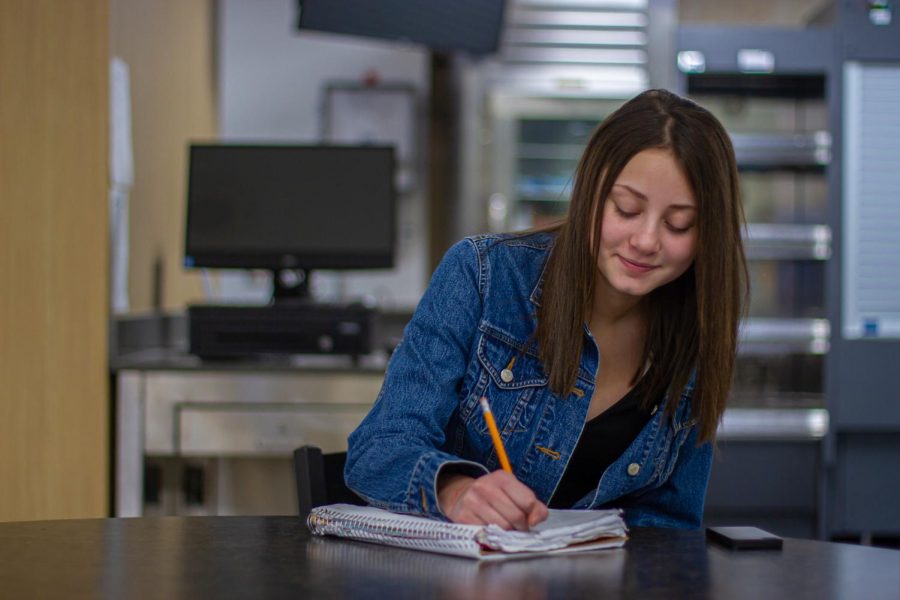 Estelle Brower journals her experiences as a way of overcoming the past. (Emma Campbell / The Talon News)

In eighth grade, freshman Estelle Brower started struggling with her eating habits. In 2019, she overcame her eating disorder after seeking the help of her parents and professionals.

For her, running was not just a way to exercise, but it was a way of staying in control.

“It was natural,” Brower said. “I ate a little less than I usually would, but it was still enough to get me through all the running I was doing.”

Everything seemed to be fine at the time, until she began comparing herself with others.

“I had a friend that was struggling with body image, and it really got me thinking about my own body,” Brower said. “I would eat less and less, and I would find ways to throw away my lunch or hide food in places. I would hide snacks at home.”

“I think it was on Easter,” Brower said. “I came up to my parents, and I was afraid because I had eaten a few pieces of candy and to me that was horrifying. I said ‘I don’t think I can do this anymore.’ ”

Brower’s choice to ask for help ultimately resulted in success at overcoming her struggle.

“A lot of people don’t want to get help,” Brower said. “But if they are at that point where they think they don’t need help, they probably do.”

Brower then went to therapy, where she took steps to become healthier.

“When you’re in recovery, you have to start with the food and the weight, even though that’s not the main factor,” Brower said. “The main factor is mental and emotional health. You have to work on that because your brain can’t work properly without food. Once you gain back the weight, then you can work on emotional stuff which is much, much harder.”

Brower’s therapist gave her helpful tips for how to deal with the emotional aspect of her eating disorder.

“There is kind of this voice in your head telling you what to do the entire time, and my therapist would refer to him as ED, for eating disorder,” Brower said. “You have to have these little conversations with him. He says ‘Oh don’t eat that’ and it’s like ‘Why not? I feel like it’ and so you fight back with it.”

Brower was able to overcome the illness because she asked for help; this is not the case for those who struggle in secret for years.

Her family and other professionals played a “large role” in her success battling the disorder.

“I have been in the counseling field for 28 years, so eating disorders have been a part of my professional life for 28 years,” crisis counselor Paul Haggan said. “It is something that I see several times a year.”

According to nurse Sherrie Thompson, many use eating as a way of coping with stress.

The symptoms of eating disorders vary from person to person and are not always characterized by weight loss.

“A lot of times eating disorders don’t present themselves initially,” Haggan said. “They start out where a student may come talking about stress or sadness, isolation, loneliness or something pretty broad and general. Eating often is a coping mechanism. It does represent a way to deal with some of the social, personal, family pressures.”

These hidden battles can open the door for more serious issues.

“With eating disorders there is a significantly higher chance of clinical depression, anxiety disorders and suicide,” Haggan said. “It is more serious than people believe it to be.”

Eating disorders can lead to other mental disorders, and can also manifest in physical symptoms.

“The body will take what it needs and it will take from the major organs,” Thompson said. “It will start to affect your heart, your liver, all those things that are the most important for your body.”

Although students may not be open to talking about such personal issues, there are others who deal with this.

“They are not alone,” Haggan said. “I know the percentages may seem small, but they are significant. Roughly 4% of women struggle with eating issues, 2% of men, so it’s common.”

Considering how prevalent eating disorders are in both men and women, it is important that students learn how to help any friends who may be struggling.

“Being compassionate to your peers is important,” Haggan said. “I tell people it is important to acknowledge and accept that that is what an individual is doing to cope. You don’t have to approve of it. You can say there are other options to deal with it.”

Additionally, helping friends who may be experiencing eating issues seek out professional advice can have a lasting impact.

“Early intervention of a professional nature oftentimes increases the likelihood of success,” Haggan said. “There is anorexia nervosa, bulimia nervosa, binge eating, and you may have heard of pika where they eat non edible food. The success rates can vary from 20 to 70%. That means there are 30-80% that don’t get much success. Given those odds I would say professional help is the recommendation.”

For people who choose to seek out help, the district has resources and staff members that are committed to assisting all children and each of their individual needs.

“Not everybody is going to be put in the hospital,” Thompson said. “All these different things can be different for each child. We can help them and make it convenient for what they need.”

Although it may be hard to talk with a friend who may be battling an eating disorder, there are a few practical ways to go about doing so.

“I think as a friend, no matter what it is, if your friend doesn’t seem right or you’ve seen something I think you need to talk to them personally,” Thompson said. “Not texting. Don’t put it on the phone because you never know who is going to get a hold of your phone.”

Thompson also gave advice on what students should not do when talking to struggling friends.

“Kids should not say ‘You’ve got to eat’ or ‘That’s not right’,” Thompson said. “I don’t think you should make those kinds of judgements when you might not know what you’re talking about. You may not know why they are doing that and the stress of you doing that to them can sometimes make it worse on a person.”

Estelle believes that the support of friends has helped her form new positive ways to cope in life.

“You have to have a good team. If you’re on your own, you have these habits and you can’t break them without and outside force. You can’t break out of those habits without help. My parents were so stubborn and I hated them for it. But they were my saving grace.”

She was able to use creative outlets in her healing process as well.

“You realize at one point that a lot of the things you used to have are gone, for example friends and sports,” Brower said. “So what helped me was focusing on the things I did have, such as writing, which allowed me to express my emotions without judgement, as with painting. Choir let me focus at being able to excel at something. It’s all about finding what’s right for you and learning how to express yourself in healthier ways.