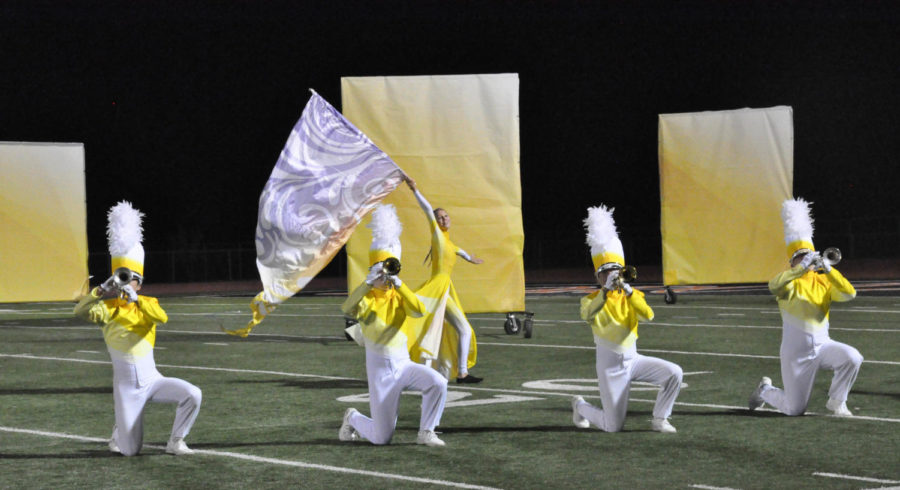 The Argyle Marching Band competes at the Sounds of Springtown Marching Competition on Oct. 12, 2019. (Delaney Lechowit | The Talon News)

It’s half-time at the football game.

They march out in matching uniforms and shakos, moving in perfect unison across the football field to the rhythm of the drums. The crowd watches in awe as they perform a choreographed show for eight minutes. By the time they are finished, the stands have erupted into cheers and applause.

Led by fifteen key seniors, this year’s marching band has continued Argyle’s long-lasting legacy of greatness. Over their four year campaign, the seniors have led the band to two silver state medals and an area title.

“They are not only leaders on their instruments, but they also lead by example, showing how to behave or what to do,” band director Asa Burk said. “They have the experience. They just do the things that they’re supposed to do and people follow because they are successful.”

The band program is a tradition for some families, with younger siblings following in the footsteps of older family members.

“My brother was a junior when we moved here, and I was in fifth grade,” senior ensemble captain and band president Tatum Earp said. “That was in 2012, which was a state marching year, and initially I didn’t care because I thought I wouldn’t ever play an instrument. I was mad that I had to go to every contest because they took forever. But then we got to the state marching contest, and I saw them, and that’s when they finally clicked as a band. It was super cool to see their performance. I was like ‘that’s amazing!’ and immediately I was like ‘I want to be a part of that.’”

Since rehearsals started in July, the band has conducted practices six days a week, including two rehearsals every Monday.

“Band is a really big commitment,” senior band member Elizabeth West said. “We put a bunch of work and hours into it, and sometimes it feels like it isn’t properly recognized. I feel like more people should be aware of how much time goes into our show.”

Seventh-year band member and current drum major Taylor Childress believes that the seniors play an important role in the band.

“[The freshman] definitely look up to the seniors,” Childress said. “They will remember our leadership styles and personality.”

Being a part of band is not an easy extracurricular and something that should not be taken lightly.

“Being in band has taught me work ethic,” West said. “During marching season, at the beginning of the year, you get your music and you struggle through learning it. There’s countless hours of playing it over and over again and then later in the season when you actually get to see the show, you see that it was all worth it and there are so many little things that came together. It’s amazing.”

In marching band, bands only have the chance to qualify for state every other year. Although this year is not a state year, the band has already earned first place at three competitions this season, with two of them being against 5A and 6A schools.

“I really consider the state marching silver medals to be super important,” Earp said. “I know a lot of people outside the band program, or even inside the program, consider that to be a loss for us because the band has won gold medals before that. It’s really not a disappointment at all and it’s extremely remarkable to even make it to the state marching contest.”

The seniors have helped the program start its transition from a small school to a large school, a move that takes time and commitment in order to happen successfully.

“In the next two or three years, we will probably go 5A, which means there is a bigger jump in competition level and requirements,” Burk said. “Our kind of immediate and near-future goals are to get the band prepared for that competition level. We’re not trying to be competitive and good enough to be considered great for 4A, we want to be considered competitive for 5A. When we grow to a 5A officially, we want to compete on that level so we aren’t the low man on the totem pole and we aren’t behind the curve trying to catch up. We want to be just like how Argyle’s always done.”

Involvement in band helps students evolve as both a group and as individuals.

“You learn what your natural tendencies are as either a leader or a follower,” Earp said. “I tend to be a natural leader and I like to take charge of things. I had to learn to set that aside and say ‘I’m going to follow what this other leader is doing’ because that cohesiveness is so much more important than being the person at the front.”

Senior drum major Carter McNulty is currently in his seventh-year of band and believes band has taught him more than just teamwork.

“I have learned accountability and responsibility,” McNulty said. “I’d be a lot lazier than I already am if I wasn’t in band.”

Band members say that band is more than just music and choreography. 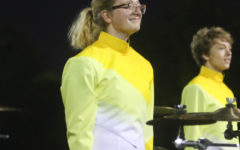 “One of the things that is the biggest for me is learning to work as a team. You have to learn how to put your differences aside and work together because if you don’t, it can affect the entire program. You have to learn to work together as friends and as members of the band because if people disagree with each other or even don’t like each other, it can create some huge tensions that affect the whole group.” ”

While band students do have the early practices, the long travels and the never-ending choreography to memorize, Childress believes it does pay off in the end.

“I have learned what it really means to have integrity and that your character really shows through in high-stress situations,” Childress said. “It is a lot of hard work, but it is worth it in the end.”

The students who participate in band have a special connection that is visible even to those on the outside looking in.

“It’s family both in a positive and negative sense,” Earp said. “You really grow towards these people and become friends with them. You have all the normal sibling bickering, and it can be really complicated, but it’s so worth it and so fun.”

Many of the seniors plan to continue some form of music through college, whether it be majoring in band or keeping it up as a hobby.

“There’s something about just playing music together,” Earp said. “Performing is one of the greatest joys of my life, and that’s why I’m pursuing it in the future.”

Burk said his favorite part of his job is seeing students “start at square one and watch them go through their journey to a performance.”

“I think there is a bunch of hard-working kids that are super, super dedicated to music or their instrument,” Burk said. “They just enjoy what they do and work hard at it.”

Although band is not an easy commitment, it is one that benefits both students and the program as a whole.

“The big thing about band is that it’s not about you,” Earp said. “You have to sacrifice everything you have. You have to put in the work and time, but the reward from all that is absolutely incredible.”