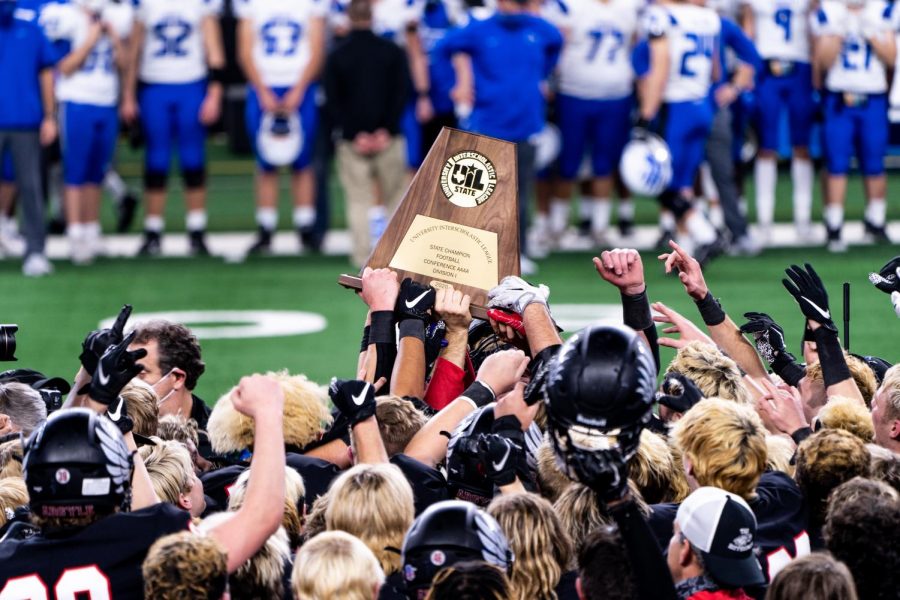 The Eagles celebrate after winning the State Championship title on Dec. 18, at AT&T Stadium in Arlington, Texas. (Nicholas West / The Talon News)

“I knew we had many of the ingredients for a championship team,” head coach Todd Rodgers said. “It’s no different than making a cake and having the right ingredients, but it has to be cooked right. These kids worked together and stayed together and put themselves in the right spot.”

The Argyle Eagles won their second state championship title on Dec. 18 after defeating the Lindale Eagles 49-21.

“To come out with our guns a blazing offense and our shutdown defense, it has been the perfect combination for our 16-0 season,” Rodgers said.

Led by offensive MVP Tito Byce and defensive MVP Zach Stewart, the Eagles were able to dominate and win the game. This dominant performance was not just a one time showing from the Eagles. This year, the team not only did not lose a single game but also never trailed an opposing team.

“I think this just shows the type of energy we came out with,” senior quarterback CJ Rogers said. “It’s all in the practice each week so we came out and showed that.”

The Argyle seniors made sure to come out in their last game and it was evident. Rogers had a great day throwing the ball, connecting with fellow seniors Cash Walker and Cole Kirkpatrick along with his tight end Jasper Lott for two touchdowns. Byce had a field day rushing the ball stacking up four touchdowns, three of which came in the first quarter.

“At the time, I was just thinking we needed to keep driving,” Byce said. “I wasn’t satisfied yet; we needed to win the game.”

Defensively the Eagles were able to make big plays when it mattered most, forcing turnovers and ending nearly every drive with a punt.

“I think we played all year with an edge,” Stewart said. “We wanted to prove ourselves and I think we were able to do that.”

The team was unsure if a state championship would even be possible this season. The COVID-19 pandemic put limitations on training and gathering, causing unexpected issues for the team.

“COVID was such a distraction early on,” Rodgers said. “It created a lot of anxiety on the team along with mitigation, risk, and factors that you don’t normally do.”

However, with the many downsides of the pandemic, the team was able to turn the situation around, working hard to achieve a great season.

“I think our kids really conformed to it in July,” Rodgers said. “Then for them, it was just worrying about football when football season started.”

“This is where I like to think the pandemic became a blessing,” Rodgers said. “[CJ] really stepped out during the pandemic and was instrumental in getting the receivers together, doing heavy weight workouts, working with his videos, and just really working from the front and setting a pace for our team like most of our seniors were and I’m so proud of them.”

The team has been able to become a unified group and put aside differences in order to help their team win big games this season.

“They do not care who gets the credit,” Rodgers said. “Not anytime. They bounce around and smile for whoever scores or makes the tackle. They’re grinders and good workers. I don’t want to be too cliche or anything but they’re just unbelievable kids.”

Despite injuries, COVID-19, and many other obstacles being thrown their way, the team has still been able to rally around one common goal: the need for a championship.

“It’s a very joyous event,” Rodgers said. “I’m very proud of my football team, I think they played like champions tonight and they earned this.”