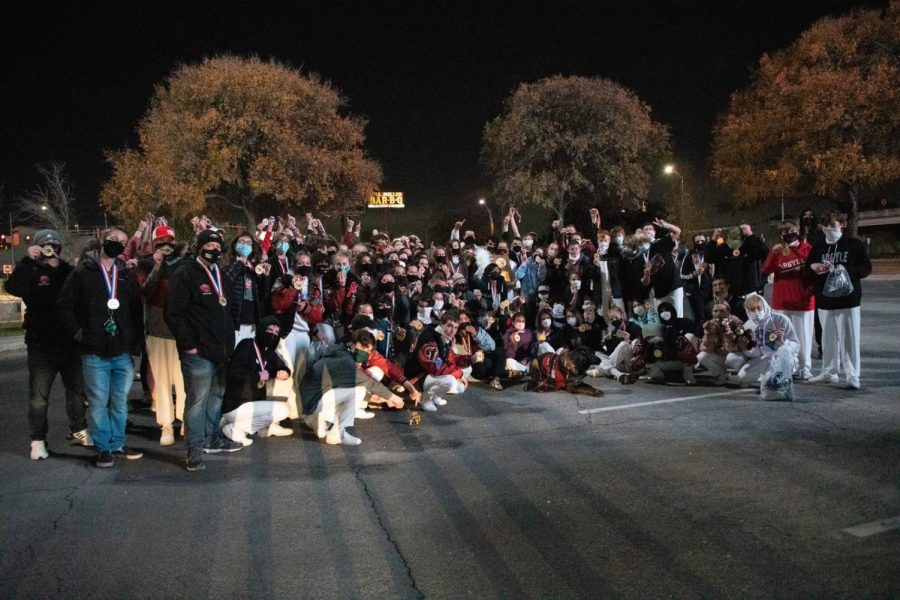 The Argyle band claimed the 4A State Marching Band Championship on Dec. 14, 2020 at the Alamodome in San Antonio, TX (Photo Courtesy of Britt Flaten)

Despite an unexpected year full of hardships, the Argyle Band finished one of its most successful seasons ever and was named the 2020 4A Marching Band State Champions.

“When I found out we won, I kind of went crazy,” senior clarinet player Trinity Flaten said. “I wasn’t really thinking anything except that I had to hug everyone near me. I was so incredibly proud of everyone and being a senior and watching many of them grow to make this program what it is today made me so thankful for their hard work.”

The state medal was not easily earned, as band students spent about eight hours each week rehearsing outside of class plus time during the band period.

“We’ve been rehearsing more than we ever have before,” senior drum major Sarah Crowder said. “We’ve been putting in countless hours and repping over and over again. We’ve worked on focusing in and getting everything right the first time, and in the week leading up to state we’ve put a big emphasis on shutting doors – not leaving any doubt in the judges heads or leaving any room for another band to do something better than us.”

With the COVID-19 pandemic, the students have had to focus even more on teamwork and remaining optimistic despite the obstacles in front of them.

“There were so many things dragging us back and sometimes it was difficult to see the light at the end of the tunnel,” senior drum major Katy Atkins said. “But even though I wanted to give up at some points, I couldn’t let my band down- I couldn’t just leave what I had started because everyone was counting on me just as much as I was counting on them. Since we’re a team sport, we can only be as strong as the weakest link in the chain, so as a leader if you were frustrated, all you could do was buck up and move on then support the kids that were feeling the same way and build them up to be stronger.”

Although COVID-19 has presented many challenges, it also brought with it more time to practice and fine-tune every skill.

“We started preparing for state back in July,” Flaten said. “During the summer, UIL decided to push back state to December when it’s normally in November. With it pushed back, we couldn’t start learning our marching show until later. However, we used this time to work on our fundamentals and learning the music which seemed to pay off. As Mr. Lemish (Argyle band director) said, ‘No one has touched us in music.’ Throughout the school year, we were here every morning at 6:50 to rehearse no matter if it was 100 degrees out and sunny, or 30 and raining.”

One of the key factors that contributed to the band’s success is the senior leadership both on and off the field.

“It’s definitely been different,” Crowder said. “I’ve had some different responsibilities than drum majors did in previous years. For instance, I’ve had to remind people to wear masks and be careful. I and the other leaders have also put a big emphasis on relationships this year, trying to connect with the band as much as possible, and keeping up morale with the longer season.”

In addition to memorizing choreography, band students also had to remember to wear masks and follow social distancing whenever possible.

“We were definitely thrown a curve ball with COVID-19,” Flaten said. “Band is something that absolutely requires us to take off our masks which made things quite difficult. Anytime we were just marching and not playing we wore our masks because the drill required us to be less than six feet apart. We even had to get fabric to put over the bells of the instruments to prevent aerosols in someone’s breath from spreading. As we got closer to state, band director Mr. Bird started having anyone in the band, no matter if you marched or were part of guard, eat in the band hall to prevent us from having our masks off around anyone that may have been exposed to COVID-19.”

Being in band has allowed students to make music and spend time with friends as well as how to work with all types of personalities.

“Band has taught me so many things, but I think the most important is time management and how to work as a team, especially with such a large group of people,” Flaten said. “Between balancing school and band I’ve had to learn when to study and do my homework to keep my grades up and still make rehearsal.”

Band students feel they have grown as both people and musicians.

“Being a part of band for something as long as I have had taught me that success doesn’t come from luck, but it’s a product of hard work,” Atkins said. “There’s no magic penny nor special sock to suddenly make us great, but it’s the members of the band and their diligence that really turns a program around and unites them together.”

While many people assume the band will have a successful season each year, what oftentimes gets overlooked is how much the band changes with every school year due to graduation.

“I think sometimes people don’t realize how much work goes into what we do,” Flaten said. “We are here every morning like any other activity and  practice after school once they all leave. It’s a lot of work but it definitely pays off. Also, the band has a tradition of doing well at state and I think sometimes it’s just expected of us to do well. But every year is an entire new group of people with different strengths and weaknesses and we worked incredibly hard to earn first place; it was not given to us.”

The State gold medal is just one of the many rewards that have come with being in band.

“We’ve worked so hard for this,” Crowder said. “For the seniors, this has been four years of giving up summers, weekends, and sleeping in. I have never been this proud and I am honored to be the drum major this year.”