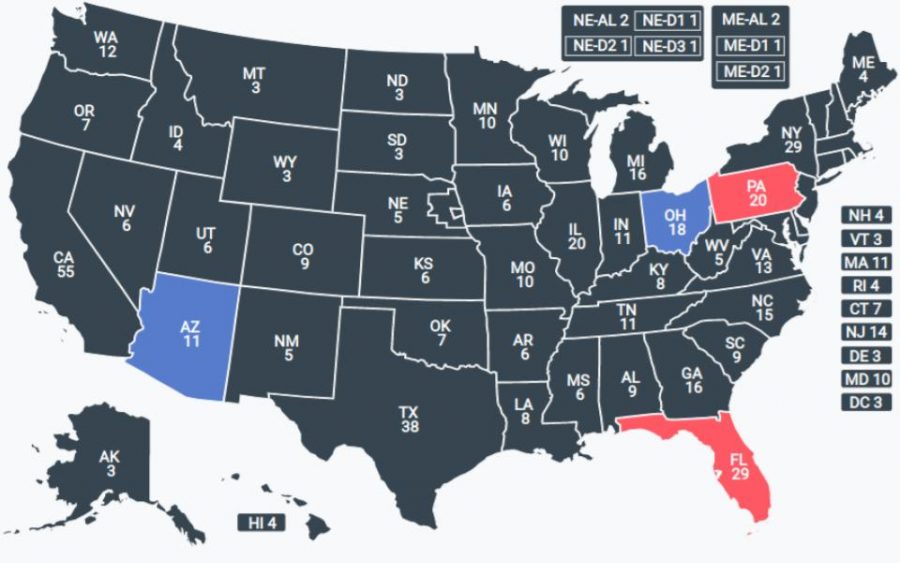 The Limp to 270 (At the Moment with Billy Mykel)

A look at the current election standings

As the day of the first Presidential debate arrives in the wake of political wildfires and the nation begins preparing for a bare knuckle night on November 3rd, the outcome of the election seems increasingly unpredictable. Even so, the importance of staying informed and aware of current events is astronomical.

When looking at the current trajectory of the 2020 election, both democrats and republicans should pay special attention to key swing states and to the preparations of both parties’ leadership.

The most important factor in the current election is the swing states’ electoral votes. The key states this year, Florida, Pennsylvania, Arizona, and Ohio, could tilt the election in favor of either candidate and bring them to the needed 270 electorates to win. Right now Joe Biden maintains a narrow lead in the polls in each of the four states (Polls), although that doesn’t come close to the actual story on the ground. In Florida, Biden has a close 1.6% lead in the polls, a very thin margin that leaves the state, and its 29 electoral votes, in limbo going into the final month before election day. This narrow lead is also under fierce attack by the Trump campaign and state republican party, with a massive door to door effort underway to register an ever-increasing number of republicans to vote. This effort, which dwarfs the democratic one which has chosen to self-limit its operations during the quarantine, could possibly lead to more republicans voting on election day than democrats, leading to a Republican victory in the largest swing state. Another key swing state that is far more contested than traditional polls would show, which experts say Biden would need to win in order to win the election, is Pennsylvania. Pennsylvania, where Biden holds a steady 5.2% lead, poses a big problem for the Biden campaign that has increasingly had trouble getting supporters to register to vote. Much like in Florida, the actual ratio of Biden supporters who are registering to vote is lower than Trump supporters in many parts of the state, especially in western Pennsylvania where centrist-democrats have been fleeing the Democratic party in increasing numbers since 2004. These battleground states, which have become huge danger zones for the democratic party, stand in contrast to Arizona and Ohio, two swing states where local democrats have been far more active in their efforts to register and convince voters. Although the gap in the polls is very narrow, 3.4% in Arizona, and 1% in Ohio, the poll gap appears to be translating into actual voters to a greater degree. Although predicting the outcome of the election in any of these states is near impossible as of now, it appears that Trump has a slight logistical edge in Pennsylvania and Florida while Biden maintains a duo poll and logistical edge in Arizona and Ohio.

Another important factor in the election comes from the way party leaders are preparing for election day. In a letter to congressional democrats, the democratic majority leader Nancy Pelosi urged House democrats to prepare for an electoral tie or contested election, in which case the House of Representatives would vote for the President and the Senate for the Vice President. In her letter, she stressed the importance of extending the democratic majority in the House and gaining a majority in the Senate so as to win the executive branch in the case a clear winner isn’t found. What this shows is that, in the mind of the veteran politician Nancy Pelosi, the election is close enough to warrant a serious preparation for an electoral tie, showing just how unpredictable election night could be and just how uncertain and cautious democratic leaders are, in spite of poll numbers. Democratic politicians aren’t the only ones preparing for this rare scenario, the republican party currently has the majority of state delegates in the House, and their leaders have been pushing to maintain and expand their majority going into the election. This is important because, in the case of an electoral tie or contested result, the state delegates in the House of Representatives are the ones who actually decide who will be President, and of the 50 states, Republicans control the majority of delegates in 26, democrats in 22, with Michigan and Pennsylvania without a clear majority. These preparations, which have been taken by both parties, signals not only how close the race really is, but also how contentious the results could become.

In the end, predicting anything about election night is all but impossible even this close to November 3rd. With the future of the nation resting in the outcomes of such unpredictable elections with such minute margins the importance of remaining informed and educated is absolute, now more than ever.