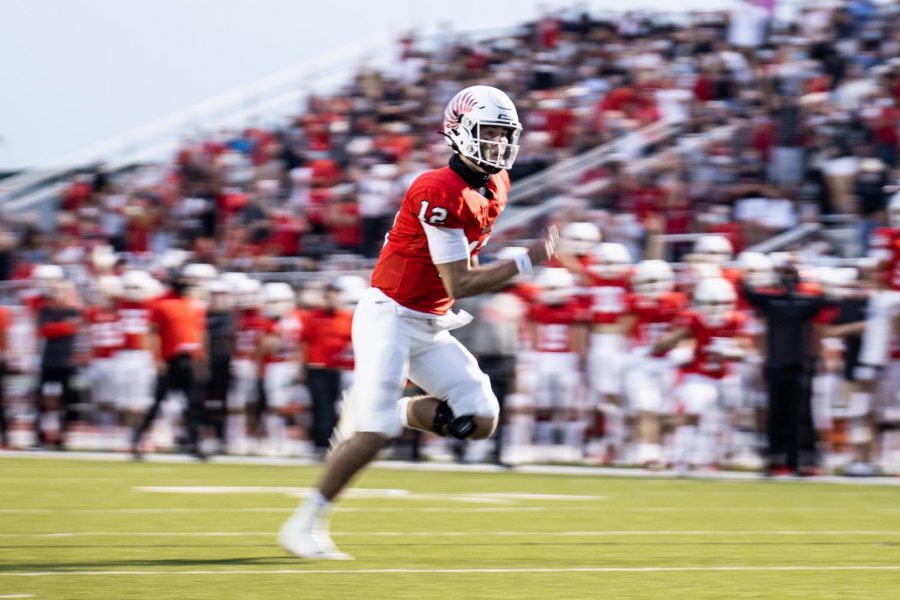 Senior CJ Rogers begins his first season as a starter on the varsity football team. (Nicholas West / The Talon News)

The crowd quiets as the ball flies through the air. It’s fourth down and the Eagles need this conversion like their life depends on it. Luckily, senior quarterback CJ Rogers is the one throwing it. His pass goes right into the hands of his receiver, and not only do the Eagles get the conversion, but they also score another touchdown on the La Vega defense.

CJ is entering his senior year and his first season as a starter for the Varsity team. Throughout the first three games, he has been lighting up the stat sheets for throwing 711 yards and 13 touchdowns alongside 0 interceptions.

“He has stepped in and played great and has really been able to lead the team very well as you’ve seen from his performance in the first three games,” receiver Wayne Pritts said.

CJ has been able to make the switch from backup to starter like the flip of a switch along with making the transition from former quarterback Bo Hogeboom as seamless as possible.

“He’s done nothing but work very hard and put himself into position to be a team leader,” Athletic Director Todd Rodgers said. “The quarterback’s task is to lead the other 10 men on the field and CJ is very gifted at that.”

CJ has made sure to be seen as a leader by the team and by the coaching staff with the hard work and dedication that he plays with.

“When I met CJ, he was resilient,” Rodgers said. “He came out and he wanted to play quarterback. He is always ready for anything no matter what comes his way.”

CJ is committed to making himself and the team the best they can possibly be.

“CJ makes sure to get his teammates involved,” Rodgers said. “He calls his receivers to throw, arrives to practice early, and leaves late.”

During his junior year, CJ suffered a sprained knee and had been sidelined for some time. He was approached with the idea of making the switch to wide receiver but persisted with the position quarterback.

“I made sure I got all of my rehab done and that I worked hard to come back better than before,” CJ said. “The quarterback position is the position I love to play and I know that I can do it better than anyone no matter what.”

The coaches and his fellow teammates know what CJ is capable of and are all sure he is the player that will lead them far into the playoffs.

“As the season moves on, everyone is starting to play better together,” said Pritts. “We’re just going to continue to grow and keep getting better and better each week.”

CJ is looking to lead the Eagles to their fourth win of the season against Waco La Vega on Friday.

“La Vega is just another game for me,” CJ said. “I know what I can do each week and I’m gonna make sure they know after they meet us.”