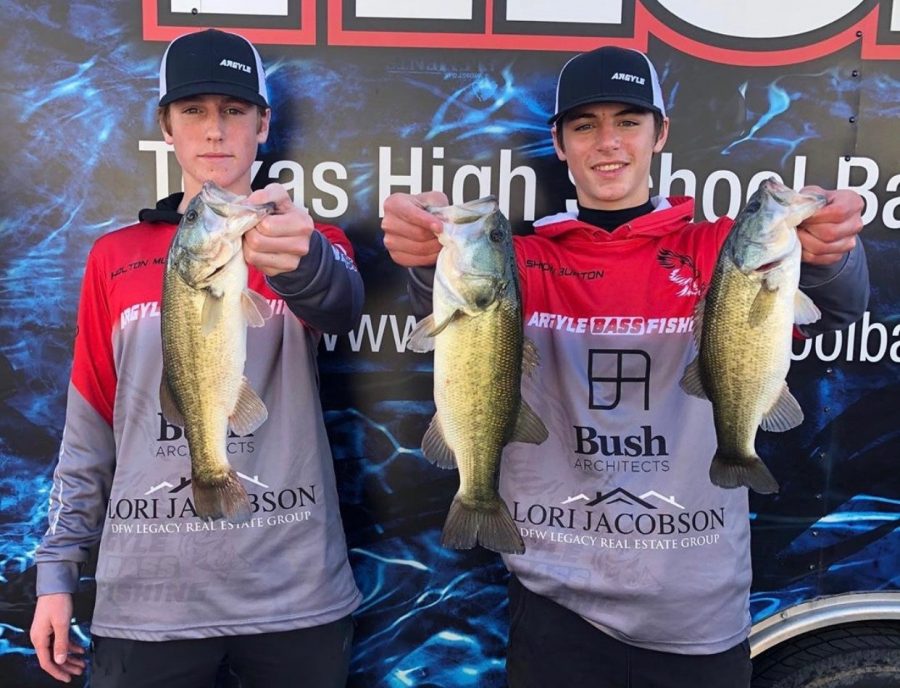 The Bass Fishing team gained attention as juniors Ashton Burton and Holton Mudd became state qualifiers during their region competition by catching a three-pounder with only a few minutes left.

“My accomplishments in the bass team have included placing top 30 out of close to 200 teams in multiple tournaments and specifically catching our only three keepers on Lake Ray Roberts within 10 minutes,” Burton said. “Catching a three-pounder with 6 minutes left in the regionals tournament [sent] Holton and me to state.”

Despite setbacks, Burton and Mudd worked hard to ensure that they knew the lakes well so that they could succeed.

“Another obstacle that has greatly impacted me as a fisherman is not having a boat,” Burton said. “Holton and I had to research and practice ponds more frequently because we did not own a boat to get on the water and practice the lakes we were fishing. Our boat captain Ronnie Ennis was kind enough to offer his time and boat to help us each and every tournament. ”

In addition to initially not having a boat to practice, Burton injured his collarbone during his freshman and sophomore year, causing concern and another setback.

“I had to get surgery, and that surgery gave me a plate with 10 screws,” Burton said. “[During]spring break of sophomore year I went snowboarding with a group of friends and on the last run [I] took a hard fall and rebroke the same collarbone. I got x-rays and it had broken at the end of my shoulder. My biggest concern was that I still had two tournaments to fish and was unsure if I was [going to] be able to recover fast enough and fish those tournaments. Coincidentally, COVID gave me a perfect amount of time to recover and strengthen my shoulder back to normal. “

Burton and Mudd have learned how to work together and make most out of their partnership and be prepared for all of their competitions by remaining flexible.

“Ashton and I have been successful in the past from studying the lake and trying multiple different patterns when what we thought would work didn’t work,” Mudd said. “We will keep this success by studying as we have been and staying versatile on what we throw. ”

Burton and Mudd are continuously researching and preparing for their state competition on July 25 at Lake Belton  before they compete.

“We are preparing by studying the lake, watching past tournaments on Lake Belton and reading articles over the lake,” Mudd said. “We also are fishing Belton before hands to get a feel for their patterns.”

Burton and Mudd found partnership and support from each other and also from their boat captain and coach. In addition to all of the guidance Ennis has given them, including the use of his boat for practice, he believes that their passion and consistent hard work will lead to success.

“As far as I’m concerned these boys deserve to fish the State tournament,” Ennis said. “They have their hearts in it for sure. They don’t know what quit means.”