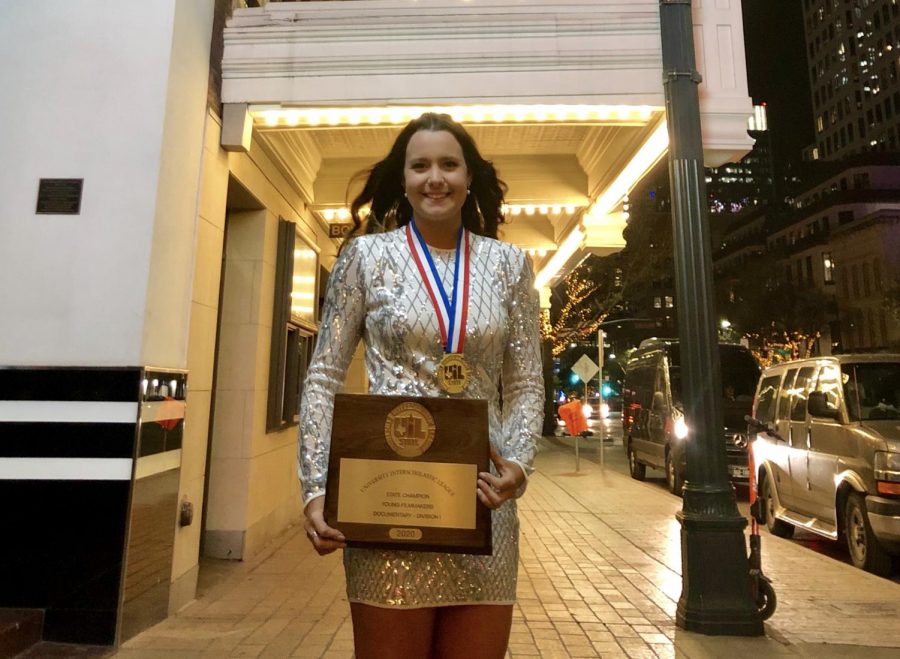 Senior Campbell Wilmot received first in the UIL Documentary State Film contest for her film ‘Drive.’ The film documented the story of her friend Rhyle McKinney who, despite her hearing and breathing difficulties, still succeeds in basketball. Her film received superior in all categories, which is an unprecedented achievement in this competition.

“When I joined The Talon my freshman year, I started doing more photos than videos,” Wilmot said. “But as the years went by I learned from then seniors Annabel Thorpe and Lauren Landrum who taught me a little more about video and I discovered that that was my passion, more than photography or writing. So I decided that I wanted to do film.”

Wilmot has participated in the State Film competition three times, and yet the win came as a bit of a shock.

“I definitely was surprised,” Wilmot said. “I was not expecting it at all because there was one film that came from Nocona High School called ‘There’s Only So Many Dances’ which was about special needs kids and this camp that they held in their town. Honestly I still think it’s better than my film. It had so many great qualities to it and it was an amazing story so I was expecting them to win first.”

Her journalism and broadcast teacher, Stacy Short, saw the win coming and wasn’t surprised at all.

“I knew all of our documentaries this year were really strong, and I knew just from the reactions of people when they saw it that we would place in the top three for sure,” Short said. “At that point you never know what the judges are going to like or dislike, but I’ve always been confident that they would be in the top three at state.”

Wilmot uses the people around her as inspiration to document high interest level stories.

“Rhyle, as it turns out, is one of my best friends and I had already known her story,” Wilmot said. “We’ve been in school together since she moved here, which was in early grade school. I had always known her and I was brainstorming ideas, and she has a really powerful, motivational story so I thought, who better to film this over than one of my best friends?”

Wilmot says the time and effort put towards this film took “over 100 hours,” making the win all the more rewarding.

Wilmot is hoping to continue documenting stories in her future after she graduates.

“I want to pursue film as a career in the future and some sort of journalism,” Wilmot said. “I’ve discovered that I really like video, so that’s definitely what I want to focus on.”

Though she is young, she has had a lot of experience and already created a large portfolio of finished projects.

“She has one video that she did that has thousands of views already and this one that she won state which is up to 2,000 views now,” Short said. “She’s done music videos, highlight videos, football videos, and even started doing some weddings. She’s been growing and maturing both as a photographer and videographer and she’s doing great.”

As someone who has worked hard and found a passion for film, Wilmot advocates that others try their hand at videography as well.

“If anybody wants to try out film, they should definitely go for it,” Wilmot said. “You never know what stories you will discover. It really opens up other doors and gives you potential to do other things.”