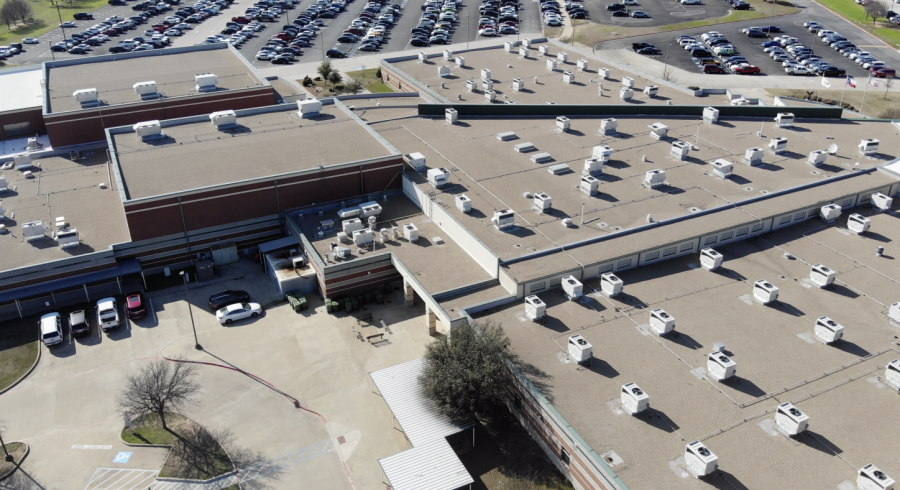 As the district approaches its final years as a part of the 4A classification, administrative leaders are taking measures to ensure that the future of the district is not lost in its rapid expansion.

A school board election will be held in May for town citizens to vote on how they want the district to look in the future and to further expand the current middle school campus.

The district has grown a record 12.9% in the last year and has received about 400 move-ins from surrounding districts. When current Principal John King joined the district in 2007, there were roughly 400 students enrolled at the high school.

“To date, we have 1,051 [students], so it has more than doubled—pushing tripled since I’ve been here in 13 years,” King said. “We gained about 120 students this year and we’ll gain about 120 more next year, so the growth is really astronomical at this point compared to where we have been.”

Prior to 2010, the district experienced an annual loss of enrollment. That changed in 2010 when the school district implemented the Limited Open Enrollment (LOE) program.

“We allowed students to transfer in,” King said. “We had an application that you could fill out, and if you were selected you got to come into the district. Once you came in, as long as there were no discipline or attendance concerns, then you got to stay and your siblings could come as well.”

After open enrollment, the population boom began, with families entering the district and moving into newly built subdivisions. The two fastest growing neighborhoods, Harvest and Canyon Falls, have 2,000 future lots to develop and are expected to build a combined 300 homes annually.

“I think the growing enrollment can benefit the district provided that the growth is managed, and so far we have done a great job of that,” Wright said. “This district can well be 5A in 2022 after the next alignment.”

To accommodate the increasing enrollment, the district opened a new middle school for the 2016-2017 school year. In the fall of 2018, a wing was added at the high school to cope with growth and to replace the portable trailers that had previously been used.

“The plan for next summer is to flip-flop campuses,” King said, “so the middle school will come up here and the high school will go down there.”

The new high school campus will have tennis courts and practice baseball and softball fields. The band will have a practice area and the football team will have a couple practice fields as well. The only thing missing will be the large stadium.

“If you’re familiar with the middle school campus, right now they have one big academic wing, and there’s another full academic wing identical to that one that will be built,” King said. “The cafeteria will be expanded to accommodate the high school needs and there will be an auditorium.”

The new high school building is set to be completed by August of 2021 and will hold 1,750 students. The current high school enrollment sits at 1,052 students.

“When we had 400 kids, I knew every face and almost everybody’s name,” King said. “With over 1,000 students, it’s hard for me. I know a lot of faces, but there’s still days when I walk around and think ‘Is that even one of our students?’ There’s got to be a way for us to easily identify who our students are and who they aren’t.”

Safety concerns can arise when trying to cope with such rapid expansion.

“When you knew everyone’s face, it was easy to say ‘okay, you’re not one of our students’ but now it’s getting much harder,” King said.

The district plans on putting several measures in place to keep better track of students.

“We have to come up with ways for safety purposes to identify our kids very easily,” King said. “I think you’ll see a police officer on every campus before long, you’ll see I.D. cards worn so we can easily identify kids and I think you’ll see a drug dog on campus a lot more. Our campus has two entrances, which is really weird because most schools only have one entrance.”

Senior Lanie Rodgers has called Argyle home since she was four years old, and has witnessed first-hand how the growth has impacted the district.

“When I started here, we had 45-60 kids in our kindergarten class and we grew up like that,” Rodgers said. “It didn’t get big until my eighth grade year when a lot of people moved in.”

The district growth is not expected to slow down anytime soon, with 430 to 500 single family homes expected to be built annually over the next five years. According to recent demographics, the district should hit 6,000 students by the 2025-2026 school year and be well over 8,000 by the 2029-2030 school year.

“I don’t know if this is a positive or negative, but [it is] change,” King said. “If you’re a person who likes a bigger atmosphere, then it’s a positive for you, but if you’re someone who wants to keep Argyle small, then it’s probably a negative for you. Either way you look at it, it’s just going to be different than what you’re accustomed to.”

According to Rodgers, the  movement towards 5A brings new students and competition, but the loss of a certain small-town feel.

“It’s good because there is harder competition, but it’s also bad because the town doesn’t really have that community feel anymore,” Rodgers said. “I feel like Argyle will always have that bubble, but with this growing we aren’t as attached anymore.”

Despite the potential community consequences, the school will move forward with its plans for expansion and use funding from the potential bond package to finish developing the future high school.

“All the fine arts halls will be added to this bond package,” King said. “There will be a big, nice competition gym added to this package. There will be some more administrative offices added and a counseling suite, which will be very nice for [the counselors].”

For the first several years at the new campus, high school students involved in certain sports will be bussed to the current high school to use the large stadium.

“The bond that passed in 2017 was a $166 million bond and it did not include a stadium,” Wright said. “In order to build a stadium, Argyle ISD has to pass another bond that we are projecting for May of 2023.”