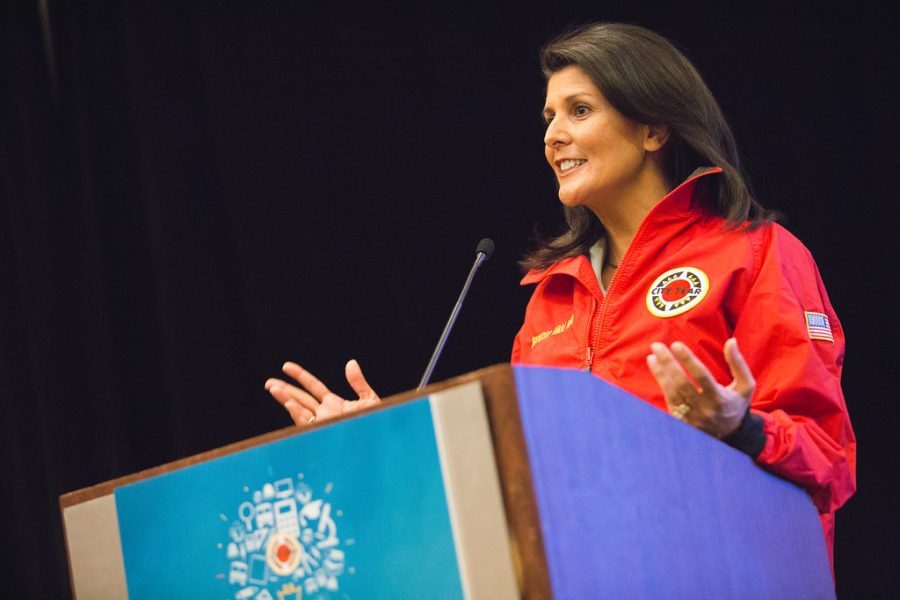 Nikki Haley speaks at City Year in support of schools in need. (“City Year Columbia Ripples of Hope 2016” by cityyear is licensed under CC BY-NC-ND 2.0)

Following many hardships and scandals, including the beginning of the impeachment trial on Jan. 16, the Republican party has been faced with the real possibility of a 2020 loss for the Trump-Pence campaign. In light of this, many people have, despite the unconventional appearance, called for either the GOP to run a second candidate in the primary election, or to replace Pence as vice president. Among the potential replacements for the president and vice president, one name stands out among the rest.

The Republican party should run Nikki Haley as a replacement for either President  Trump or Vice President Pence in the upcoming 2020 election.

One of the biggest advantages that would come with a Haley bid for the presidency or vice presidency, comes from the historic value she would hold. Haley would not only be the first female president in history, but she would also be the first Indian president, two facts that she takes very seriously. Haley has worked extensively throughout her private and public career to support women’s rights and opportunities, serving as the President of the National Association of Women Business Owners and immersing herself in the West Metro Republican Women organization – standing for Women’s rights while maintaining the traditional beliefs that the GOP holds dear. Haley also stands as an advocate of immigrants’ rights and freedoms, maintaining the great value immigrants like her family have and rejecting the immigration fears that have plagued the nation. Through these stances, Haley speaks to both conservative and liberal voters across the country.

Haley also has outstanding experience that makes her a great candidate. Beginning in 2004, Haley became a member of the South Carolina House of Representatives, serving for several years before becoming governor in 2010. Following her time as governor, Haley was appointed by President Trump as the Ambassador to the U.N. in 2016. Here Haley would gain enormous amounts of foreign policy experience, until her resignation in 2018. The culmination of all these years of public service and experience comes in the form of her policies. One of these issues that Haley identifies is the problem with corruption and representation in the federal government, which Haley believes can be addressed by putting new restrictions on lobbyists, instituting term limits on Congress, and increasing transparency in political donations. Haley is also in favor of comprehensive education reform, including incentives for teachers to work in poorer areas and increasing government support of new teachers.

In the end, the odds of the Republican party running a second candidate against their sitting president or President Trump abandoning his VP are very low, but when looking at the 2020 election, Nikki Haley could become a very valuable asset for the GOP, and maybe something even greater in 2024.