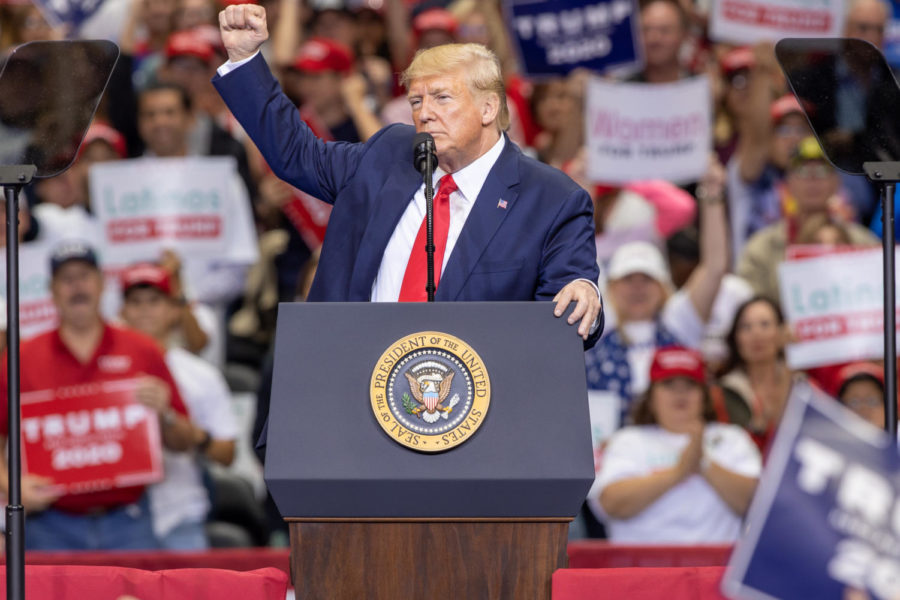 President Trump speaks at his rally at the American Airlines center on Oct. 17, 2019. (Andrew Fritz/ The Talon News)

An Inquiry into the President (At the Moment with Billy Mykel)

Democrat majority party leader, Nancy Pelosi, announced on Sept. 24 the beginning of a formal impeachment inquiry into President Trump. This occurred following a growing controversy involving a phone call between himself and the President of Ukraine about his political rival, Joe Biden.

President Donald Trump should not be impeached on these charges.

Before addressing the current impeachment crisis, it is important to understand what impeachment is to begin with. The ability to impeach a president was laid out in the Constitution as a means to remove the Commander and Chief from office for “treason, bribery, or other high crimes and misdemeanors.” While what falls under the umbrella of these charges is fiercely debated, it is universally accepted that impeachment is important to prevent executive overreach and corruption. When charges are brought against the president, the resulting events mirror the regular criminal court. The process of impeachment begins in the lower chamber of the House of Representatives, where it is debated and voted on whether charges should be brought against the President via a resolution of impeachment. If the House passes the resolution, a trial is held in the Senate, with House members serving as the prosecution, the Senate as the Jury, and the Chief Justice of the U.S. Supreme Court as the presiding judge. Impeachment trials also have the same preconditioned necessity of fair and honest justice. Unlike a normal criminal proceeding, however, the judge cannot overturn a guilty verdict by the Senate, and there is no research over jury nullification in these proceedings.

While keeping in mind that what falls under the umbrella of an impeachable offense is a highly debated and politicized topic, the accusations against President Trump are reactionary and rushed. More time has been spent on political slander then on empirical evidence in the events leading up to the Impeachment Inquiry. Although hard evidence is meant for the trial, there needs to be some form of evidence-based justification for these proceedings. This problem is incredibly apparent in this case as the impeachment inquiry began even before any information was shared with the House. Pelosi made her formal announcement of the inquiry before Congress was given a summary of the phone call or saw the whistleblower report. The inquiry also falls under an unforgiving light within the context provided by the recipient of the phone call, Ukrainian President Volodymyr Zelensky. President Zelensky came out publicly on Sept. 25 to address the growing controversy, stating that he had felt no pressure from President Trump in the phone call, that no one “pushed” him. This means that House Democrats formally started an impeachment inquiry based on partisan divisions, without basic evidence about the charges, which have been played down by the recipient of the call, President Zelensky.

As more information surrounding the controversy becomes available and the impeachment inquiry begins to heat up, it’s important to not get partisan opinions mixed up with fair and due justice. The President should not be subjected to this inquiry in this case, not just because of the reactionary nature of the resolution, but also the lack of evidence-based justification for the proceedings.