Whatever Floats Your Boat 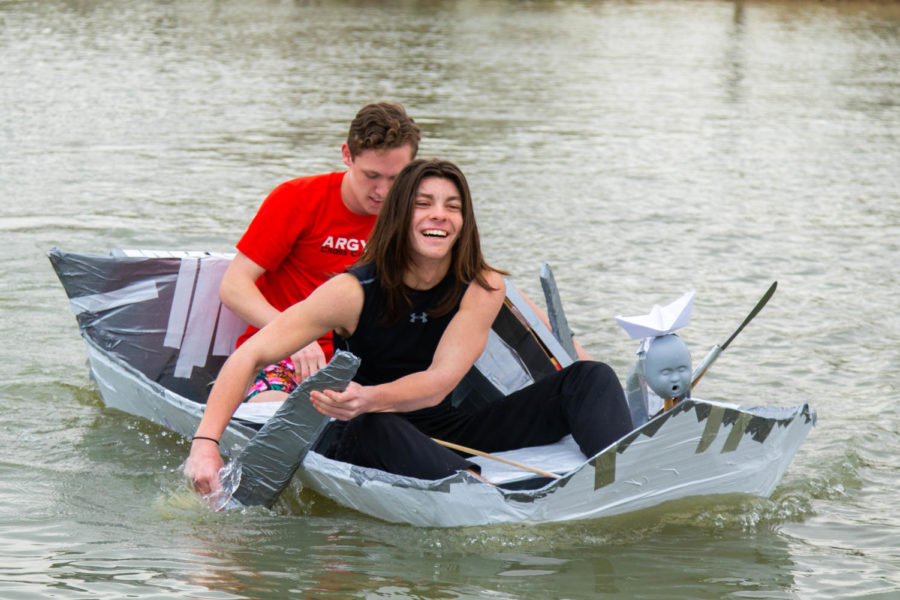 The AP Physics class took this saying literally after racing two boats made entirely out of cardboard and duct tape across the pond on school property on Feb. 26.

“We looked up what designs worked best for boats and engineering for some of the distances,” senior John Schermerhorn said. “Engineering isn’t normally a word used for working with cardboard but it was important, trust me.”

The purpose of the project was to utilize Archimedes’ Principle and build a boat with the highest amount of buoyancy.

“Most of the actual formulas we got were from Dylan Hargroves’s dad,” Schermerhorn said. “Most of the actual physics was from an engineer, which admittedly helped out a lot. The only other math we did was figuring out what angle the sides had to be for the water. We had to inlay supports into the boat so when they sat in the boat in the water it didn’t just fold in half.”

The only supplies the class was allotted to build the boat, dubbed “The Spirit of Actar” after their beheaded CPR baby class mascot, was duct tape and cardboard.

“It required about 30 square feet of cardboard, which we asked teachers to donate,” Schermerhorn said. “And $100 worth of duct tape. It was really expensive. That was the main thing that was holding us back.”

To test the boat, the class challenged Mr. Allen, the physics teacher’s husband, to a race in a boat of his own creation.

“It was successful all the way around,” AP Physics teacher Ashley Allen said. “The boats actually survived there and back and still held together, so it was 100 percent successful.”

Michael Gilbert and Dylan Hargroves were selected to race the class’ boat, as their combined weight balanced with Mr. Allen’s. There were precautions taken, as Schermerhorn and junior John Robinson are both certified lifeguards.

“The race was more underwhelming than I thought it would be,” Schermerhorn said. “The main part of the race was seeing if the boat would sink immediately. The water got up pretty high on the side of the boat, but we got Mr. Hargroves to test some buoyancy formulas on the general size and people in the boat and it ended up with just under 3 or 4 inches of non-submerge cardboard on the sides.”

This experiment was particularly exciting because the AP class doesn’t normally have projects. When they started designing the boat, even those not in the class, like senior Matthew Darnell, wanted a piece of the action.

“I helped with the design and building,” Darnell said. “I cheered for them when they didn’t sink while secretly hoping that they would.”

“Admittedly, we went kind of over the top with our cockiness at the end,” Schermerhorn said. “I brought a box full of sprite, A.J. Pabst brought sparkling grape juice, and we brought flags to wave when we got back and won.”

While the student’s boat did win the race, it may have been a technicality.

“I think we got across the pond first, the big boat,” Mrs. Allen said. “We just went to the wrong finish line. They think that they are hotshots and they need to be taken down a peg.”

The success of this experiment has allowed for the planning of future projects. For example, a ballista, or giant crossbow, and a repeat of the boat race with some new twists.

“Next year we will probably take the same two boats and another two and have a bigger race,” Mrs. Allen said. “There will probably be limits, like only this much duct tape or this much cardboard. There’s probably about 8 to 10 rolls on each boat, and they’ll only get like two or three the  next year.”